Rachel's birthday is here again, and that means she gets to pick another Big Finish audio for us to review. And we're sure to no one's surprise she chose a 6th Doctor story, "Doctor Who and the Pirates".  Doctor Who isn't new to stories involving pirates, but we've never heard the Doctor break out into song before. Plus we discuss Rachel's very special, and related, birthday present. Also some news and your feedback. 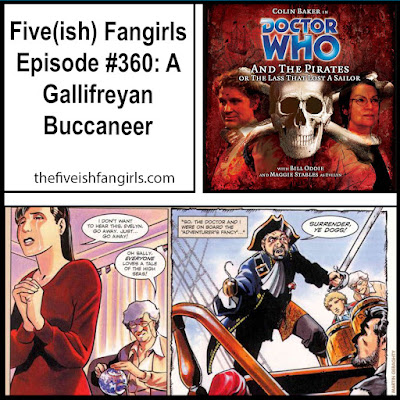 We can all help prevent suicide. The Lifeline provides 24/7, free and confidential support for people in distress, prevention and crisis resources for you or your loved ones, and best practices for professionals in the United States. 1-800-273-8255
Rachel's birthday message from Colin Baker
Episode #85 with Rachel's recap of Lexington Toy & Comic Expo
Rachel's Chicago TARDIS recap (where she cried on Colin Baker)
Posted by Five(ish) Fangirls at 4:41 PM No comments:
Email ThisBlogThis!Share to TwitterShare to FacebookShare to Pinterest
Labels: 360, big finish, doctor who, podcast

The legend of Boba Fett has been building since his first appearance in the Star Wars franchise. Now Disney+ has helped fill in some of those blanks in the story with "The Book of Boba Fett". Join us as we take a look at this addition to the universe. Plus quite a bit of news, housekeeping, and your feedback. 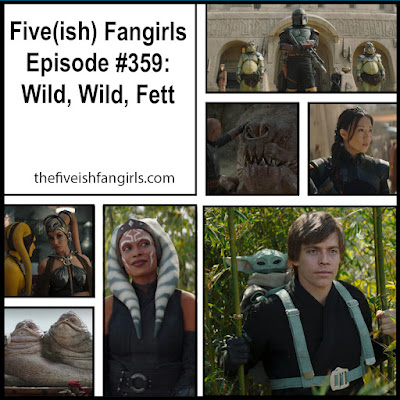 The Lord of the Rings: The Rings of Power teaser trailer

Doctor Strange in the Multiverse of Madness trailer

Obi-Wan Kenobi to premier on Disney+ May 25

Posted by Five(ish) Fangirls at 7:35 PM No comments:
Email ThisBlogThis!Share to TwitterShare to FacebookShare to Pinterest
Labels: 359, book of boba fett, star wars

The story of Romeo and Juliet has been told numerous times, but we're pretty sure this is the first time using lawn decorations. Join us as we review the hidden gem that is the animated feature, 'Gnomeo and Juliet'.  Two feuding houses and a lot of laughs for the entire family, and a rockin' score to boot! 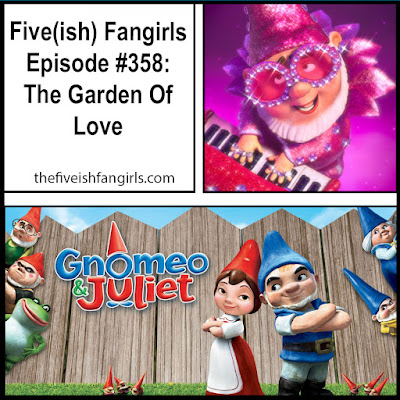 James McAvoy - This Morning interview for Gnomeo and Juliet

Social and Historical Context of Romeo and Juliet

Posted by Five(ish) Fangirls at 11:56 AM No comments:
Email ThisBlogThis!Share to TwitterShare to FacebookShare to Pinterest
Labels: 358, gnomeo and juliet

Five(ish) Fangirls Episode #357: Up On The Roof

After being hidden away from the public for over 50 years, Peter Jackson has taken the hours of footage of The Beatles while they were working on the album 'Get Back' (later renamed 'Let It Be'), and has created a docuseries of epic proportions. We take a look at why this documentary is so important to the history of the Fab Four, but also how raises the bar for what is capable in film restorations. We don't have any news but we do have your feedback and a few "dad jokes" to (hopefully) make you chuckle. 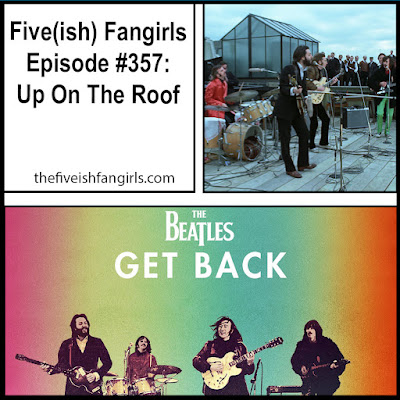 New documentary “The Beatles” Get Back” recasts old narratives

The Beatles ‘Get Back’ Documentary: Everything You Need To Know

The Beatles: Get Back - An exclusive deep dive into Peter Jackson’s revelatory new movie

Peter Jackson on The Beatles: Get Back & Technology Invented for the Docuseries

Posted by Five(ish) Fangirls at 8:54 PM No comments:
Email ThisBlogThis!Share to TwitterShare to FacebookShare to Pinterest
Labels: 357, disney plus, documentary, get back, peter jackson, the beatles
Newer Posts Older Posts Home
Subscribe to: Posts (Atom)