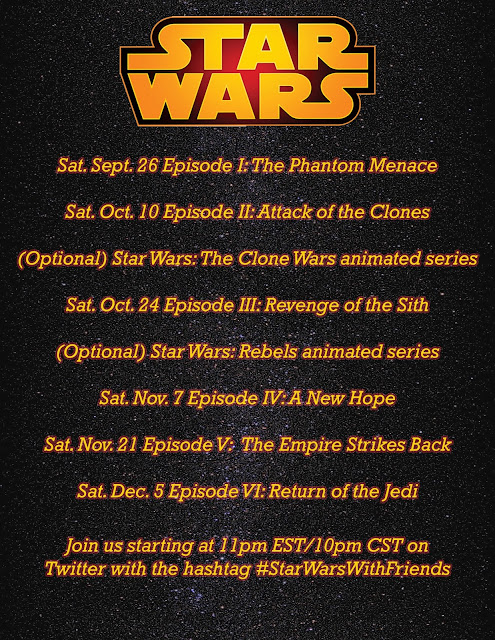 Just like we did for the Marvel Cinematic Universe before The Avengers: Age of Ultron came out, we're once again going to marathon another set of movies before the next big film comes out. This time in anticipation of Star Wars Episode VII: The Force Awakens we'll be watching all SIX of the previous Star Wars films*.

As with our other Tweet-alongs, we'll all jump on Twitter and press play at the designated start time and Tweet out our thoughts, comments, and whatever else comes to mind. You are more than welcome to join in as little or as much as you like, there's no pressure, it's all in the name of fun and friendship....and the force!

As an added option, we've included where The Clone Wars and Rebels animated series fall within the Star Wars cannon. We will NOT be doing any soft of Tweet along with these, but they are cannon so you if haven't watched either yet, you might want to.

So mark your calendars, and we hope to see you on Twitter for #StarWarsWithFriends

*Based on the polls we did earlier this year, if you have it, we'll be watching the CINEMATIC release versions of all six films. But really, watch whatever version you have :-)
Posted by Five(ish) Fangirls at 10:00 AM