It's been 25 years since dinosaurs once again roamed the earth. Five films later, we are still entranced by the idea of dinosaurs and humans together.....and Jeff Goldbum. Join us, with special guest, Chauncey, as we discuss one of the most successful dinosaur franchises of all time. Welcome to Jurassic Park! 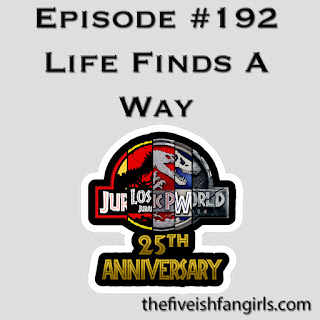 Listen on iTunes, Google Play & Stitcher
Our blog: http://thefiveishfangirls.com
Twitter: @fiveishfangirls
Email: fiveishfangirls@gmail.com
Become a supporter on Patreon: http://www.patreon.com/FiveishFangirlsPodcast
Support us by shopping Amazon through our link
We now have merch! https://mymerch.us/collections/the-fiveish-fangirls
Music courtesy of the YouTube music library