Recently I and my husband, Chauncey, hosted a game night at our home. We had several people over and it gave us an opportunity to play several styles and types of games that we and our friends have in our collections. Here is some information and reviews of the games we played. -Rachel

Warning: Some of these games contain NSFW words and/or images. While I've included some pictures, I've tried to keep the content limited in this post as we do try keep it family friendly around here. If you wish for more information please feel free to contact me or the respective game companies. 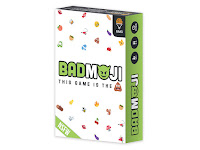 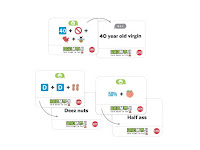 Do you like 💩 jokes? Do you like using a 🍆 or 🐱 to describe your no-no spots? Then you’ll ❤️ Badmoji!
Compete against your fellow filthy minded friends in a race to guess the lewd phrase using the iconic language of Badmoji. the player with the most points at the end of two full rounds is the Badmojiest and gets to give their opponents a swirly 😀.
We promise, this game 👢🍑


Badmoji is easy to learn, but can be challenging to play as it requires players to be savvy in emoji use and common phrases and lingo. Many of the emojis are not used in a literal sense, so you need to be able to think outside the box.

The solution to the puzzles never failed to bring laughs and gasps for all players. You'll want to choose your playmates carefully, some of the phrases are more NSFW than others, but this also isn't a game to play with your grandma or boss (unless they happen to have a dirty mind too!)

Our group had 8 people and we could have easily played longer than the suggested 30 minutes, if anything else it was hilarious to find out who's mind went straight to the gutter the fastest. Of course the conversation would sometimes go off the rails as we laughed and

While a downside is that players may easily remember the solutions to the puzzles when they decide to play again, it gives them a reason to test out other peoples’ puzzle solving skills and texting know-how. 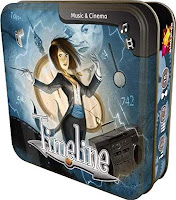 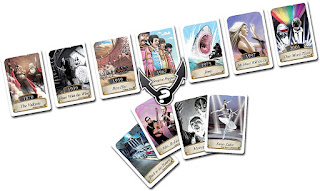 Timeline: Music & Cinema is a card game played using 110 cards. Each card depicts a historical event on both sides, with the year in which that event occurred on only one side. Players take turns placing a card from their hand in a row on the table. After placing the card, the player reveals the date on it. If the card was placed correctly with the date in chronological order with all other cards on the table, the card stays in place; otherwise the card is removed from play and the player takes another card from the deck. The first player to get rid of all his cards by placing them correctly wins.

We have owned this game for a while and it's one that Chauncey grabs often. The box and cards are small enough to travel easily so we've played it in all sorts of places. Depending on how many people are playing will determine how long it takes to play, but on average games are pretty quick (about 15 minutes).

Players ages and familiarity with "popular culture" will determine how well you can successfully place a card on your turn. Some historical knowledge helps as well. Was Flight of the Valkyries before the William Tell Overture? Sure, the Eagles came before Daft Punk, but was Enter the Dragon between the two? There's some strategy involved as well, do you play the cards you're more confident about first or hold them till later when the timeline is more full?

If you want to make the game even harder, combine with other of the Timeline sets (Inventions, Historical Events, etc). This also helps with the replay-ability factor if you're someone with a good memory. 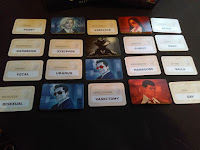 Two rival spymasters know the secret identities of 25 agents. Their teammates know the agents only by their CODENAMES.
In Codenames: Deep Undercover, two teams compete to see who can make contact with all of their agents first. Spymasters give one-word clues that can point to multiple words on the board. Their teammates try to guess words of the right color while avoiding those that belong to the opposing team. And everyone wants to avoid the assassin.

This is one of the games brought by our friend Matt. There are so many versions of Codenames out there, from Disney to Marvel. I've seen it all over at GenCon but have never had a chance to play. What makes Codenames standout from a lot of other card style games is the longevity of it. You will literally never replicate the same game. It really is strategy and interpretation based and really requires critical thinking, and a decent vocabulary.

Again, this is a NSFW version with different degrees of "dirty, so choose your players carefully.  Games don't take very long so you can easily play several times. Like the previous games, this is easy to travel with as it's just a box with a bunch of cards, so this game can be taken on vacation or for a "pick up" game at GenCon. 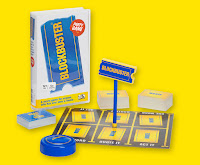 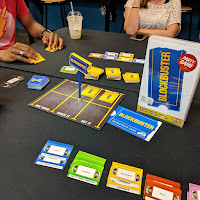 The golden age of video rental is back with a party game all about those movies you know and love. And like all great blockbusters, this one is a double bill!
In Part One, two players go head-to-head in a movie buzzer battle. For Part Two, they’ll be describing and acting out as many movies as they can for their team to guess.

This was the "highest tech" game we played since the timer/buzzer required batteries (which we never seem to have around the house!) But once we dug up a couple we were good to go, and thank goodness. I picked this game up at this year's GenCon and have been itching to play it since I got it! Thankfully our group of friends are movie buffs (of varying degrees and tastes which will factor into how well your team does).

The game is played in two parts. First is the Movie Buzzer Battle: Both teams are given a topic (like “movies with dogs”), and players each have 15 seconds to yell out a relevant title (Homeward Bound!), then reset the timer (ala speed chess). Continue back and forth (All Dogs Go to Heaven! Oliver & Company!) until the clock runs out.

Whoever runs out of time hands the advantage to the other team, who take control for the next round, which is a fun mix of charades and movie knowledge/trivia. A member of the winning team picks six movie cards, strategically keeps three, then passes the rest to their competitor. In three stages, the player must coax their teammates to guess the film via one word, a quote, and a pantomime.

It was so fun and funny to try and keep your mouth shut if it wasn't your team's turn, and at the same time see everyone wrack their brain when the pressure is on. The more players you can have on each team the better off you'll be, especially if each person's personal tastes in movies varies from the others (I'm not a horror fan so I found those cards to be harder than others). It might also make things easier if you have someone who doesn't want to play and can be in control of the timer.

This game takes the longest to play out of all of the ones listed as to win you have to collect one card from each film category, so there is some strategy involved. You might find your team needing a category that you aren't as strong in.

The entire game comes in a "VHS" case, so it's easy enough to keep all the pieces together, plus the box just brings back a ton of nostalgia.

Overall I enjoyed playing all four of these games during our game night, and my friends seemed to enjoy them as well. It really comes down to what type of game you are in the mood for, how much time you have and your audience. The fact that we were able to play all of these games several times each of the course of the evening says a lot about the replay-ability and enjoyment of these games. So the next time you are planning a get together, why not give one of these a go?


*All games were purchased by their respective owners with the exception of Badmoji which was supplied as a review copy by Gray Matters Games. All opinions expressed belong to Rachel and do not necessarily express the opinions of other members of the Five(ish) Fangirls Podcast.
Posted by Five(ish) Fangirls at 10:53 AM
Email ThisBlogThis!Share to TwitterShare to FacebookShare to Pinterest
Labels: asmodee, badmoji, big potato games, blockbuster, codenames, Czech Games, film, games, gray matters games, movies, music, nsfw, review, reviews, timeline, trivia