A Little Extra Squee: The Cast and Crew of Jekyll and Hyde


We may think we have control when playing with evil, when in reality it controls us. Enjoy this bit of extra squee with Rachel's interviews of some of the cast and crew of Ivy Tech's student production of 'Jekyll and Hyde'. Get some insight into the production and behind-the-scenes tidbits. And of course a tangent or two. 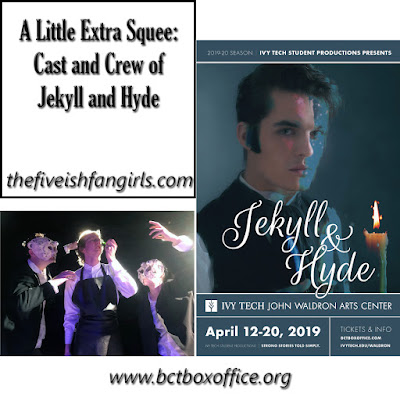 Briggs’ production was first presented at the Theatre Royal Nottingham on August 1st, 2015. The Ivy Tech production marks its United States premiere following a successful regional tour of the United Kingdom. In his adaptation, playwright, Nicholas Briggs, the voice of the Daleks and Cybermen in Doctor Who, explores the dark story of Dr. Jekyll, who seeks to prove there is good and evil in every person. In doing so, Jekyll’s experiments, while proving to be true, unveil his evil alter ego, Mr. Hyde.

Director Russell McGee, Audio Editor at Big Finish Productions and On-Air Promotions Producer/Coordinator at WTIU-TV (PBS,) says, “I’ve always been fascinated by the duality of the soul and the idea that we all wear masks in life.” The fascination led him to explore the Roman deity Janus: the two-faced god who is guardian of portals and patron of beginnings and endings.

The Ivy Tech spring production of Jekyll and Hyde concludes a season in which Producer Paul Daily sought to explore the eternal question of evil with a wide range of approaches. Daily says, “This production ends the season on a note of warning. We may think we have control when playing with evil, when in reality it controls us.”

Jekyll and Hyde runs April 12-20, 2019. Student and Senior tickets are five dollars. Adult tickets are fifteen dollars. Tickets can be purchased at the Buskirk Chumley Ticket Office at 114 E. Kirkwood Avenue, or by visiting www.bctboxoffice.org.
Posted by Five(ish) Fangirls at 5:20 PM