Five(ish) Fangirls Episode #227: Whatever It Takes

“Avengers: Endgame” picks up with the Avengers having been soundly defeated by Thanos, who, after collecting the six Infinity Stones, imposed his twisted will on all of humanity and randomly wiped out half of the world’s population, including many of the Avengers. In the aftermath of the destruction, the remaining Avengers are faced with their biggest challenge yet—finding the resolve within themselves to get off the mat and find a way to defeat Thanos once and for all.

Join us, with special guests Leah from Gals Guide To The Galaxy and Ryan from the True North Nerds, as we unpack all three hours of this epic conclusion of the Infinity Stones saga. There will be laughs, tears, and of course tangents. 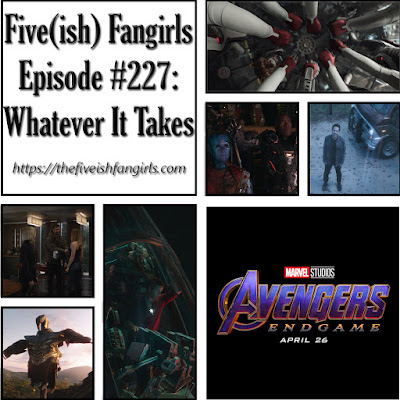 Our blog: http://thefiveishfangirls.com
Twitter: @fiveishfangirls
Email: fiveishfangirls@gmail.com
Become a supporter on Patreon: http://www.patreon.com/FiveishFangirlsPodcast
Support us by shopping Amazon through our link
We have merch! https://www.redbubble.com/people/fiveishfangirls
Music courtesy of the YouTube music library
Gal's Guide
True North Nerds
Posted by Five(ish) Fangirls at 8:29 AM